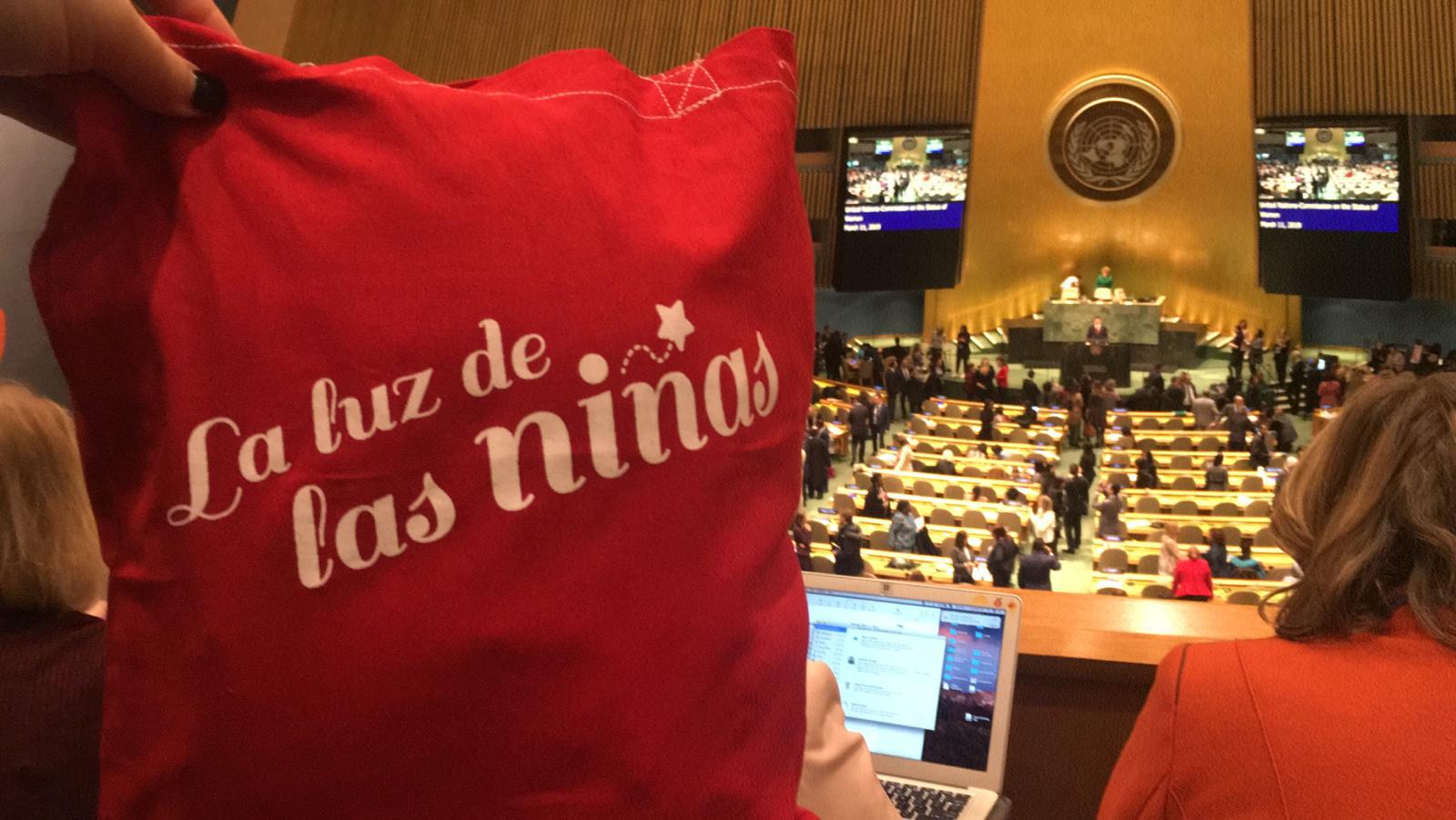 The 63rd session of the Commission on the Status of Women (CSW) took place from 11 to 22 March 2019. A delegation from Entreculturas participated in the event, contributing the experience of La Luz de las Niñas to this international forum, the UN’s principal annual event to raise awareness about the realities faced by girls and women around the world.

Together with the Fe y Alegría International Federation and the Jesuit Refugee Service, Entreculturas participated in the commission in defence of the fundamental role that education plays to promote the development of the girls our organisation works with every day. We also denounced the weak institutional capacity to end violence and discrimination against girls and women, as well as the lack of mechanisms for reporting and protecting girls that La Luz de las Niñas has witnessed.

We seized this opportunity to raise awareness about the work that La Luz de las Niñas is doing to aid, protect and empower girls, as well as to generate synergies that can jointly influence the international rights of girls.

La Luz de las Niñas has made the voices of the girls with whom we work head at the highest level of international advocacy. Because girls have their own voice; our job is to ensure they are heard and their rights guaranteed.

This year’s Commission focused on “Social protection, public services, and sustainable infrastructure to achieve gender equality and the empowerment of girls and women”.

Below are some of the most significant remarks made at the sessions in which La Luz de las Niñas participated:

“I urge this Commission to seize this opportunity to make historic progress. It falls upon a generation to be great and make change, as Nelson Mandela said, and you are that generation”, began Phumzile Mlambo-Ngcuka, Executive Director of UN Women, at the opening session of the CSW. 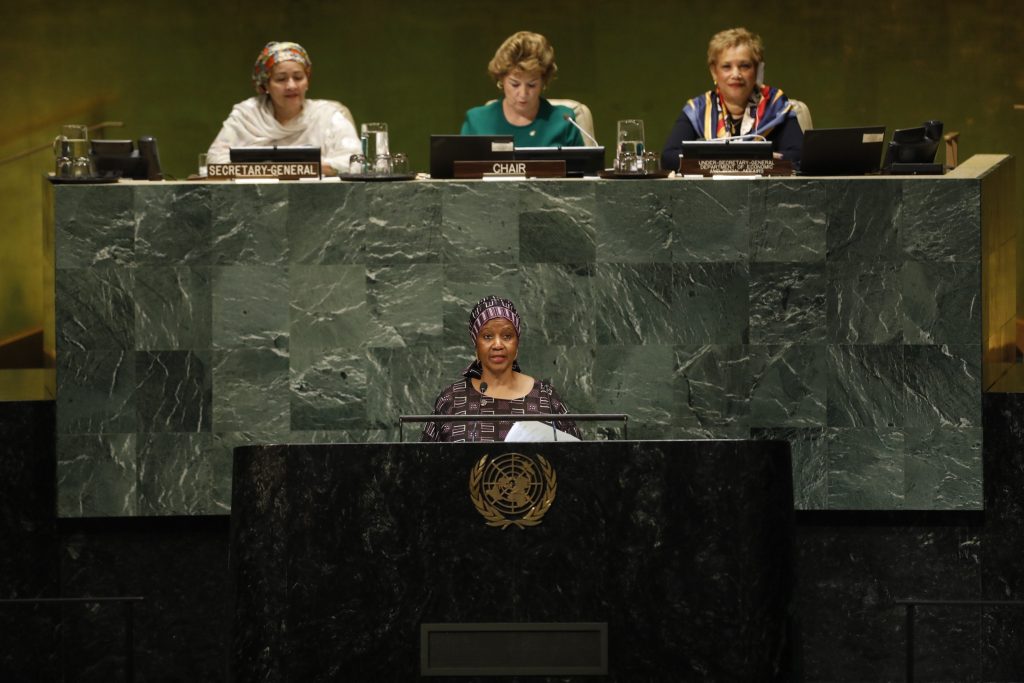 Progress and gaps in ensuring the rights of girls and women were established during the opening session. Mlambo-Ngcuka also said in her speech that “131 million girls worldwide are out of school, and latest data show a 6 per cent increase in the number of girls not in primary school”.

Geraldine Byrne Nason, Chair of the CSW63, said that “what we are trying to achieve is that men have their rights and nothing more, and that women have their rights and nothing less”. In his speech, António Guterres, Secretary-General of the United Nations, stated that “if women are not recognized in power structures, we need to redefine power, not women.”
Moreover, at a side event, UNESCO’s “Global Education Monitoring Report” (GEM Report), the latest document on the state of education for girls in situations of forced displacement, was discussed (download here).

Tuesday, March 12: Global challenges to guarantee the rights of girls.

Tuesday was a chance for us to learn about several initiatives that defend and promote the rights of girls, such as the efforts of the governments of Jordan, Ethiopia and Bangladesh to strengthen their social protection. These three countries, in a coordinated effort with the United Kingdom, are prioritising measures such as the registration of girls at birth, school scholarships, obtaining evidence on the status of their protection and their needs, as well as adapting working environments to promote care services. They will also participate in a longitudinal study to monitor 18,000 adolescents in seven countries in order to analyse gender barriers faced during adolescence: Gender and Adolescent: Global Evidence – GAGE.

We also had the opportunity to participate in the meeting that the Secretary-General of the United Nations held with civil society organisations that defend the rights of girls and women in countries around the world. After an emotional moment in which all the participants, led by the Executive Director of UN Women, sang “We shall overcome”, the Secretary-General kicked of the discussion with the testimonies of the serious violations of rights suffered by the women and girls. Leaders from various countries, including Nicaragua, Iran, the Philippines, Argentina, Ukraine, and Peru, all had a chance to speak. 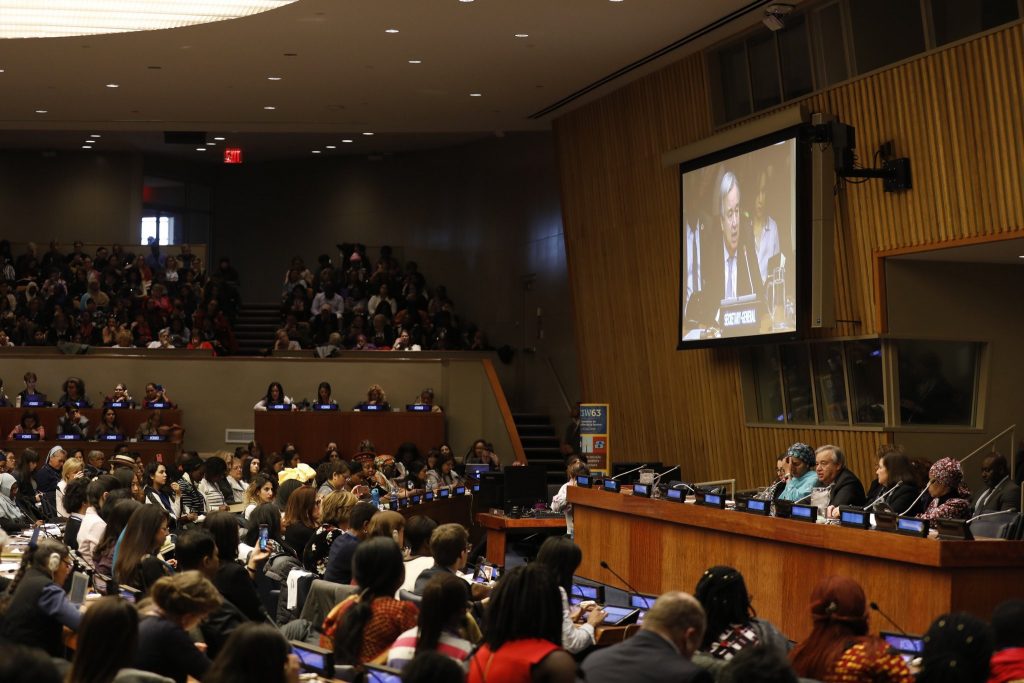 The day included engaging sessions on the reality of early and forced marriages in Latin America, adolescent awareness campaigns and the analysis laws that discriminate against women. The UNFPA emphasised the importance of raising awareness about early and forced marriages of girls and adolescents in Latin America, the only region of the world where the rates of this type of violence have risen in the last three decades.

Female genital mutilation and the efforts that countries are making to eliminate this abusive practice from local customs were discussed in the “Scaling up communication strategies and mobilizing resources for effective response” roundtable organised by the governments of Burkina Faso, Egypt, Gambia, Indonesia and Italy. Leader Ifrah Ahmad, a Somali refugee who made it to Ireland and then decided to return to her home country, argued that “the solution to female genital mutilation cannot be imported, it needs to come from Africa. It is they who know, from every context, the idiosyncrasies, the religious leaders and their communities. We must invest in African women leaders so that they can defend their rights and fight to put an end to mutilation for good”. 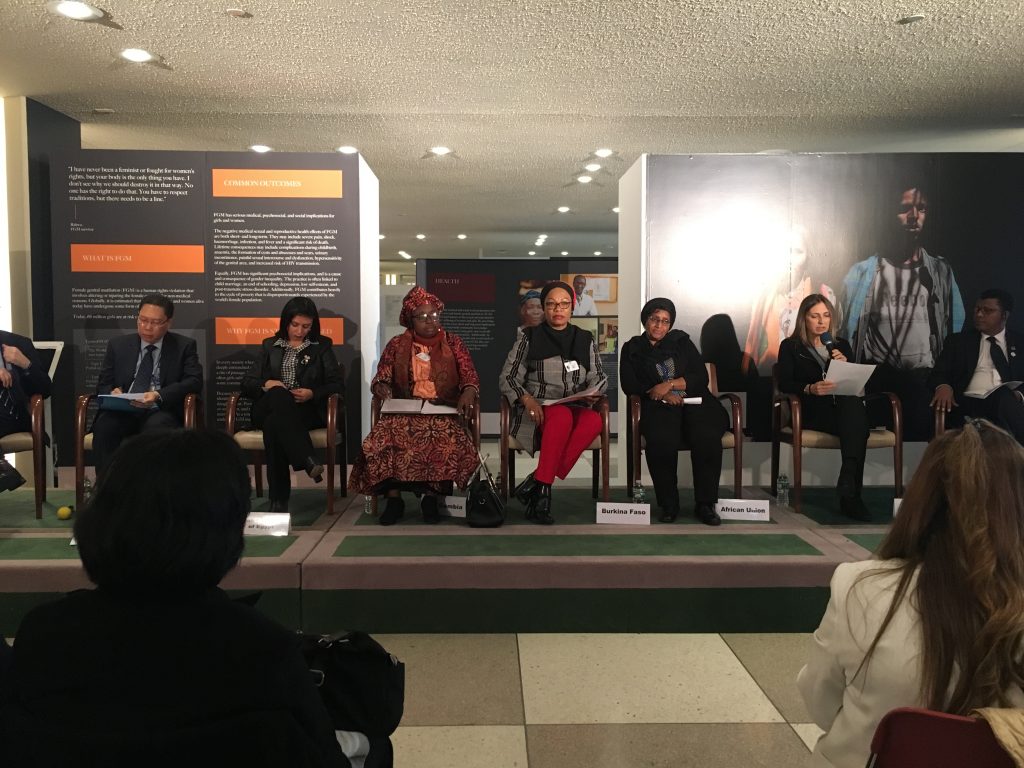 The importance of bringing visibility to menstrual health as a priority for guaranteeing the human rights of girls and women was the central message of the “Menstruation as a social protection issue: improving menstrual health management in Africa” roundtable, organised by UNFPA. In many countries, girls are discriminated against during their menstrual cycle, and their daily activities are restricted because of the stigma and taboos surrounding menstruation. Rockaya Aidara, Specialist of the Water Supply & Sanitation Collaborative Council, stressed “the importance of including this dimension when designing programmes, particularly educational ones. Otherwise, it perpetuates discrimination against girls in education”. The African Menstrual Health Coalition was launched in 2018 to fight this discrimination and promote the right to health for girls and women. 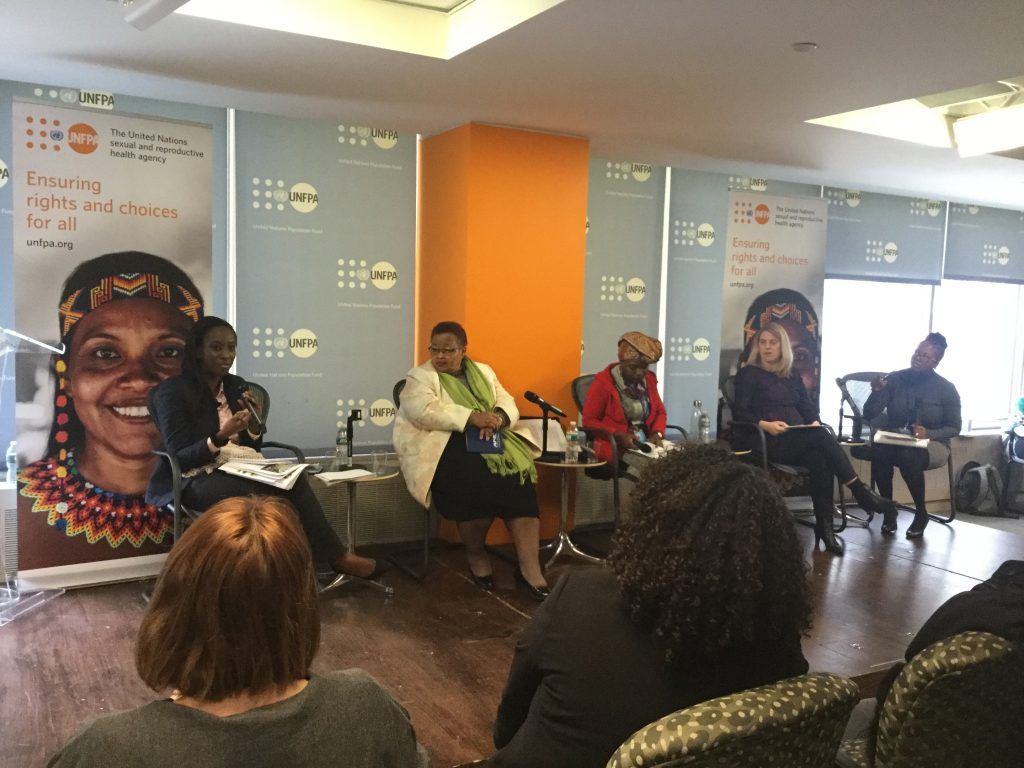 And what does the feminisation of migration mean and what impact does it have on girls’ education? UNESCO, together with UNICEF officials, emphasised cross-border academic recognition/certification, as well as the existence of large gender gaps at the secondary level for girls in situations of forced mobility. In addition, Nora Fyles, Director of the United Nations Girls’ Education Initiative (@UNGEI), shared some of the headlines from the new UNESCO document that evaluates the educational challenges faced by migrant girls. This document is a preview of the GEM Gender Report, which will be released in July 2019 ahead of the next G7 Summit to remind the seven member countries of their commitments to the Declaration of Charlevoix with quality education for women and girls in developing countries.

Thursday, 14 March: Gender equality in institutions and protection mechanisms for girls and women who are victims of violence.

The high-level government officials responsible for equality policies headed the “Gender equality in public institutions for sustaining peace”, organised by UNDP and the governments of the Dominican Republic and Colombia. Janet Camilo Hernández, Minister of Women of the Dominican Republic, argued that “there will be no peace without the participation of women” and defended the need to continue promoting the female participation in politics, since “equality is a new model to manage power and change it across all areas”. Raquel Lagunas, from the UNDP, reinforced the importance of including a gender perspective in public institutions, “by spreading seeds of gender equality in institutions, we spread seeds of development”. This entire roundtable can be watched on the “I Know Politics” Facebook page.

Closure of the CSW.

The Commission culminated on 22 March with the official delegations approving the CSW Agreed Conclusions. These conclusions encourage young people to continue to actively participate and join decision-making on gender equality and the empowerment of girls and young people. In addition, a series of recommendations were finalised for the effective implementation of the Beijing Declaration and Platform for Action and compliance with the 2030 Agenda that focuses on gender equality.

This website uses cookies to improve your experience while you navigate through the website. Out of these, the cookies that are categorized as necessary are stored on your browser as they are essential for the working of basic functionalities of the website. We also use third-party cookies that help us analyze and understand how you use this website. These cookies will be stored in your browser only with your consent. You also have the option to opt-out of these cookies. But opting out of some of these cookies may affect your browsing experience.
Necessary Always Enabled
Necessary cookies are absolutely essential for the website to function properly. This category only includes cookies that ensures basic functionalities and security features of the website. These cookies do not store any personal information.
Non-necessary
Any cookies that may not be particularly necessary for the website to function and is used specifically to collect user personal data via analytics, ads, other embedded contents are termed as non-necessary cookies. It is mandatory to procure user consent prior to running these cookies on your website.
SAVE & ACCEPT